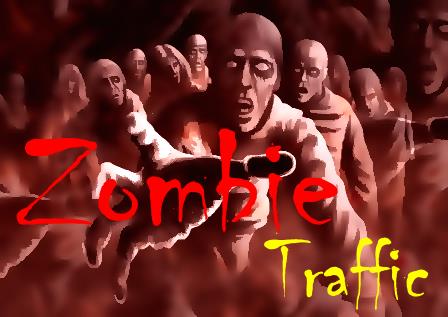 The first documented mention of Zombie Traffic appeared on webmaster world – June 6th 2010 just a few weeks after the 2010 MayDay update. For some site owner’s, that date ended a decade of annual sales and traffic growth patterns. Farewell to natural traffic and sales patterns whose regularity you could set your watch by. Those were patterns you’d expect from a global traffic source of several hundred million users. This all changed in 2010 with an apparent traffic clamp down.

The update immediately affected long-tail results and put some sites into tail spins. Over the coming years livelihoods and businesses were stifled. This is timeframe coincides with the birth of Zombie Traffic patterns. The phenomenon was observed early on by some and  years later for others, but growing observations continue today worldwide on sites of every size.

What is Zombie Traffic?

Very simply, Zombie traffic bad. Zombie Traffic can be described as time slots where traffic levels depart “normal” natural patterns to very unnatural ON/OFF patterns, both in traffic volume and conversions. The complicated patterns can be discussed in the comments below. Visitor behavior usually changes from actively exploring a site to sitting on pages for long periods of time with no interaction. When first observed, my first thought was “What a bunch of Zombies!”… so naturally the name stuck. 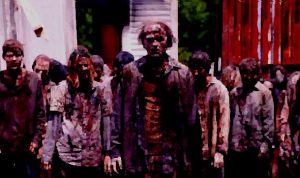 While the effect is real enough to affect your bottom line, it’s just a scary name for bad, erratic website traffic and sales. Any time a buyer is not buying, they are considered to be in zombie mode. If we watch traffic patterns for long enough, we’re going to start seeing weird things. To be clear, these are not real zombies because zombies are not real.

The effect we see can be due to a combination of many contributing factors. Before examining the cause, let’s just say that if you see the effect of these erratic periods in your logs and in your bottom line, then that makes ZT real enough for you.

As mentioned above, time of day repeatability of sales or even double plays, of two sales within the same minute after days of no action. That is beyond odd and raises an eyebrow.

Now let’s figure out what’s going on….because real or imagined, you gotta get away from these brain sucking non buyers!

Zombie Traffic can’t be pinned on any one cause yet, it’s likely very complex, or it could be sinister. Google’s black box system is always in question. Ongoing 20% quarterly profits and the whole  “Do No Evil” statement didn’t help the intention to build trust.  I prefer to think it is just a change in user behavior, but for it to happen overnight means it was more likely something in deep within the SERPS, the networks or the ether.

Here are some possible causes for Zombie Traffic patterns:

Counter-intuitive to what you’d expect

As the internet grows and the number of users increase, one would expect traffic to increase and behave more robustly. For many webmasters, the opposite has occurred. Consider the graph below. In 2007 through 2010, traffic and sales were ever increasing each year. On MayDay 2010, it suddenly took a hard hit and continued every year thereafter. This is the reason why many say that the cause is NOT related to user behavior but rather the Zombie behavior is something worked in via traffic shaping on Google’s end.

You would think that social media would be pumping our sites with fresh visitors, but that is not the case.  Algorithms like Facebook post boosting seem to want to prevent viral activity unless it is paid. 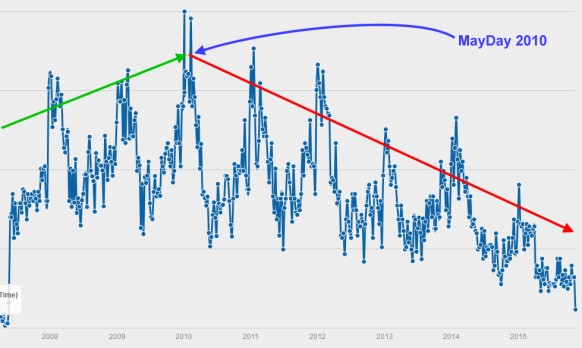 The test case site saw growth until MayDay 2010, it’s been all down hill since. Trend parallels many other cases.

Network service provider outages can amount for a good number of zombie traffic periods. One far fetched theory suggests that the whole network is slowed and throttled intentionally to control bad actors. That would make us collateral damage in and unseen cyber war.  But connectivity would not likely be the cause of the decline in the above sales conversion graph. Consider that this has been occurring widely for almost the past decade.

The web has changed from the Wild West, to a much more controlled medium and you can thank basic capitalism for that. So, to make a long story short, if your site has stopped working, and you continue to use the same old marketing methods of weaving more content or buying PPC ads, it’s likely not going to work for a full recovery. Try thinking outside the box. Get offline and start thinking about doing business the old fashioned way by pounding the pavement and shaking hands with real people again. That’s a time tested low tech method that still works wonders.

Maybe it’s just time for change. There is a cute little book out there that should be read by everyone who relies on Google traffic. It’s a very short and easy read. It  pretty much sums up what has happened in the past few years. It’s titled: “Who Moved My Cheese” by Spencer Johnson. Link below. It’s only 3 bucks.

The web is an ever changing place and what worked yesterday might not work as well today. There’s a reason for everything.  If you’re having problems with your web site sales and see zombies in your analytics, feel free to share your thoughts in the comments below.

The author is a 40+ year computer and internet veteran, having started out with the Apple II, Timex Sinclair and Heathkit computing in the late 1970’s and online since the first 300baud bulletin boards. Former mainframe systems and industrial controls engineer and current internet entrepreneur. Long time member of WebmasterWorld as user backdraft7 and now samwest.

Sites and articles reporting the misty theory of Zombie Traffic include: